“A good story has been the whole story of my working career.”

For over 30 years, Pat Spalding earned her living as a puppeteer. Touring the country with her company Ha’penny Theatre, she performed original stories, folktales, fairytales, and myths.

“But life stories have always interested me most,” Pat says. Alongside her work in children theatre, Pat wrote and performed her own first-person experience stories. “I started experimenting with stories for adults long before The Moth and This American Life popularized the form. It interested me. So I did it.” Pat told stories in bars, cabarets, community venues, and at home parties. 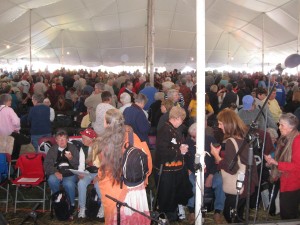 “My motivation was, and still is, the sharing of human experience. I honed my stories by building on what worked and chucking what didn’t.”

Over the years, she has worked collaboratively with other performers to create several original theatre pieces for adults and three one-woman shows. “My biggest audience ever was a tent-full of 1500 people at the National Storytelling Festival in Jonesboro, Tennessee. That was wild.”

But it wasn’t as wild as leading a marching band down Broadway in New York City as part of the People’s March For Climate Change in 2014. Pat stepped into political activism when she learned how to twirl a baton with The Leftist Marching Band of Portsmouth, New Hampshire. 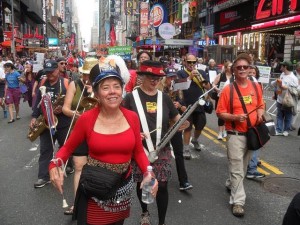 “I never would have predicted that I’d retire from puppetry to become a majorette with an activist street band. It’s been a great learning experience and the stories just keep coming.”

Pat is also emcee of True Tales Live, a monthly program on Portsmouth Public Media TV, where she encourages the true life-stories of others. “It was time to open things up and get new input. I am now as interested in listening to other people’s stories as I am in crafting my own.”