Pat’s one-woman shows are composed of a sequence of original monologues truthfully told and delivered with humor and spark. Shows are designed for small theatres, and can be easily adapted to informal venues and rooms without theatre lighting or sound amplification.

“Spalding is an exceptional storyteller because she’s brave; she never shies away from something that might be off-putting or too telling.” – Jeanné McCartin, Portsmouth Herald

WE STAYED TOGETHER FOR THE PUPPETS 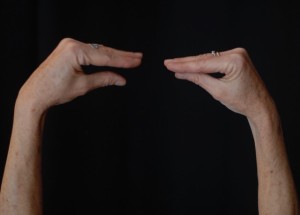 “I never planned to be a park ranger married to a bear.”

So begins the whirlwind adventures of Mr. Bear and Ranger Pat, a husband-and-wife committed to each other through the unholy bonds of puppetry. As Spalding animates the blundering backstage antics of two performers whose career in children’s theatre led them from playing the library circuit of rural New Hampshire to street performance “on Broadway” and back again, she explores the arc of a marriage. 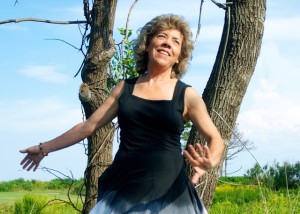 “Why fill a vacuum cleaner with dust when you can just sweep it into a dustpan and throw it away?”

In one moment, her stubbornly frugal father is goading her into rancorous conversation. In the next, he’s leading her down a woods path to lift her broken spirit toward ancient herons soaring overhead. In a series of funny and tender family stories, Pat relates the endearing struggle of two tight-lipped Yankees, a father and daughter, who support each other on the ballroom dance floor as, together, they learn the unfamiliar steps of saying goodbye.

A BOMB IN THE CLOSET 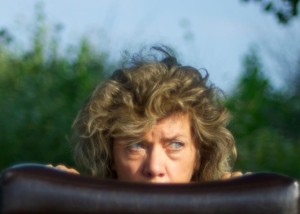 “I protected my parents from the truth – we were being watched . . . by Sputnik.”

Early in life, Pat learned the skills of duck-and-cover, hula-hooping, and memorizing her Catechism. When the Atomic Age of the ’50s gave way to the social upheaval of the ’60s, she was a cheerleader just trying to make sense of it all. After weaving together stories that explore fear of the dentist, “The Bomb,” and love and war during the Vietnam era, Pat is surprised to find herself, decades later, picking up a hula-hoop again. Now a majorette with a social conscience, she twirls a baton and her hula-hoop with the Leftist Marching Band.